Ad Blockers are a rising threat to publishers that rely on display advertising as their method of monetization.

This technology can potentially reduce the number of times advertising is seen, reducing your advertising income.

In this article, we’ll discuss how ad blockers work and offer strategies for monetizing adblock users.

What are ad blockers?

Ad blocking is a technique that removes adverts from a web page. This practice surfaced as a result of the popularity of display advertising among publishers.

As publishers began to abuse advertising in an effort to increase their ad revenue, the ads became ubiquitous and often intrusive to visitors. Some users decided they’ve had enough and turned to ad blockers. In turn, they unknowingly crippled the publisher’s revenue stream.

This cycle leads to small publishers having fewer funds, resources, and less quality content – which is a disadvantage to all involved.

Why are ad blockers so popular?

A survey by GlobalWebIndex tells us that 48% of ad block users felt that there were too many ads, and 47% found the ads annoying or irrelevant, while 33% found that ads lowered page loading speeds that affected their experience.

Other popular reasons for using ad blockers include ads being too intrusive and taking up too much of the screen, hindering the viewability of the actual content. As well as fear of online security and privacy, and using up too much battery life.

It’s clear to see that users felt that instead of ads having a positive, or even passive effect on users’ online experience, the practices used by many publishers caused ads to be seen as something negative and annoying.

How do they work?

Ad blockers are usually plugins or browser extensions that work automatically and start blocking ads as soon as the user completes the installation. They can also blacklist unwanted sites and ads across the web.

Typically, ad networks, exchanges, DSPs, SSPs, etc all communicate with the publisher website with the help of ad tags and scripts.

Before any content is rendered by the browser, these extensions listen to/watch what’s loading, compare that to a filter list, and block any matches by simply preventing it from loading/calling the ad server.

According to predictions made by Ovum in 2020, the revenue loss to publishers could reach $78 billion. If all possible ad blocking countermeasures were taken, that number would drop to $16 billion.

No matter how you look at it, the loss is still impressive and should raise some concern. In response, groups such as the Coalition for Better Ads and Acceptable Ads emerged to try and tackle the root cause of ad blocking – bad ads. These groups have been setting standards for ads that can deliver value without compromising user experience.

How to keep monetizing from ads despite ad blockers?

As previously mentioned, the most common user concerns regarding ads are a result of bad advertising practices – placing too many ads, displaying bad quality ads, etc.

That’s why going for an ad recovery strategy via Acceptable Ads is the most predictable and reliable option for revenue recovery. It respects user choice and delivers high-quality ads.

Ad blockers do not block every ad on the web page. The most popular ad blockers have a set of “Acceptable Ads” that can be exempted. The Acceptable Ads are considered non-intrusive; hence, they are not blocked by the extension.

Anyone with fewer than 10 million affected monthly impressions can join this program for free. According to them, 90% of their whitelisted sites fit into this criteria. 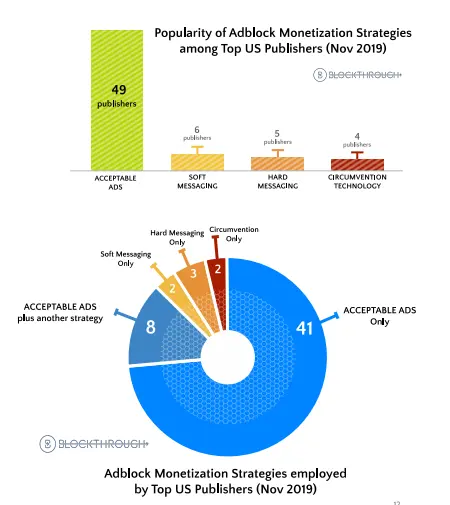 Ask users to turn off the ad blocker

In this method, you should identify which of your visitors are using ad blockers, and then prompt them to turn off the ad blocker or whitelist your site. You can do that using a pop-up dialog box. 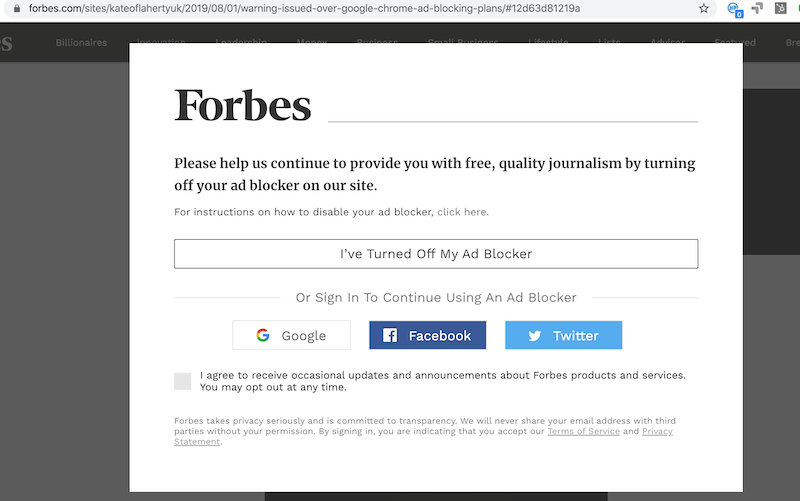 It’s best to try and keep the prompts soft, and dismissable, to not make your users feel bad, or upset, and potentially leave the site. However, you can also use hard walls and completely restrict users from viewing your content unless they whitelist your site.

Another approach utilized by popular publishers is allowing users to view a couple of pages normally, before then presenting them with a hard wall, asking them to whitelist for further viewing. 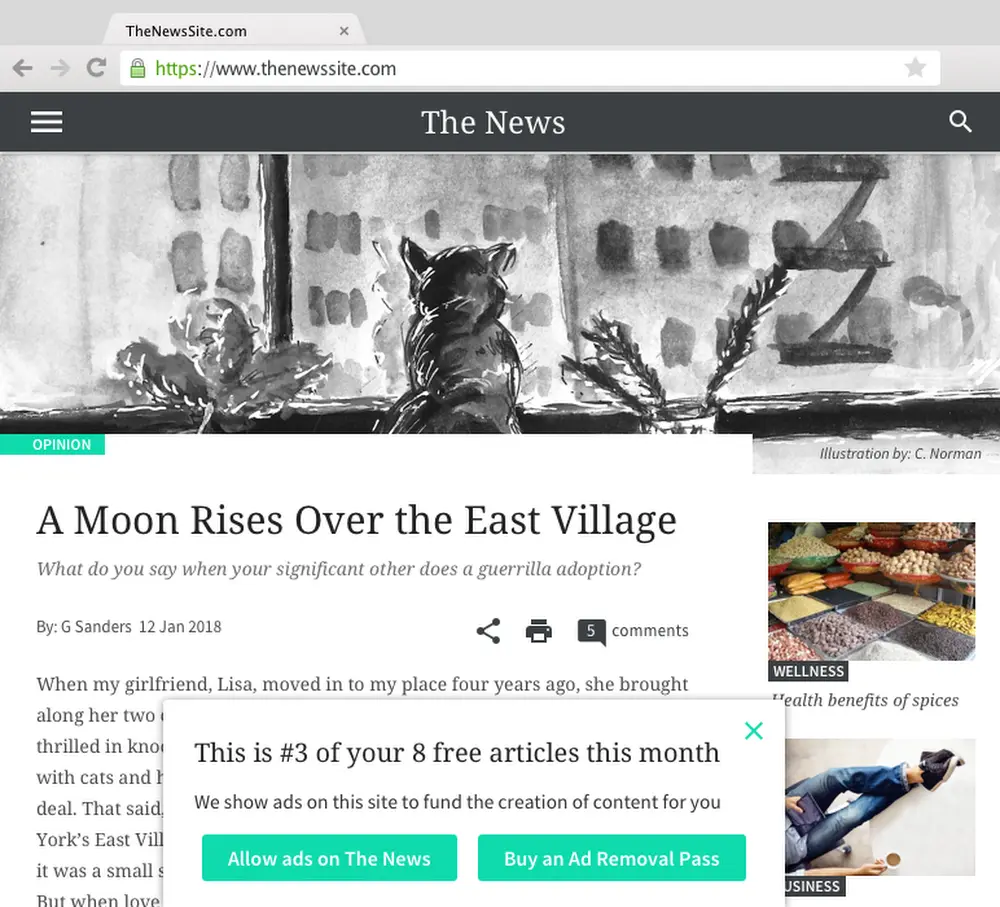 But how to detect if a user has an ad blocker?

You can use an ad block detection script and find if a user has an ad blocker with only a few lines of code. There are even a couple of providers that spare publishers the hassle of actually having to come up with their own script:

You could also opt to implement additional ways to make revenue as a publisher. Display advertising may be one of the easiest and passive ways to monetize, but it certainly isn’t the only one.

Check out other ways to monetize here.

You can also monetize access to your content altogether. Paywalls or paid, ad-free subscriptions have become popular but come with the risk of reducing return visitors.

Insert ads into your videos and podcasts

If you’re creating content in the form of videos, or podcasts, you can directly insert ads there.

Ad blockers look for HTTPS requests and on-page elements. So usually, they can’t block ads within audio/video streams without blocking the whole content. 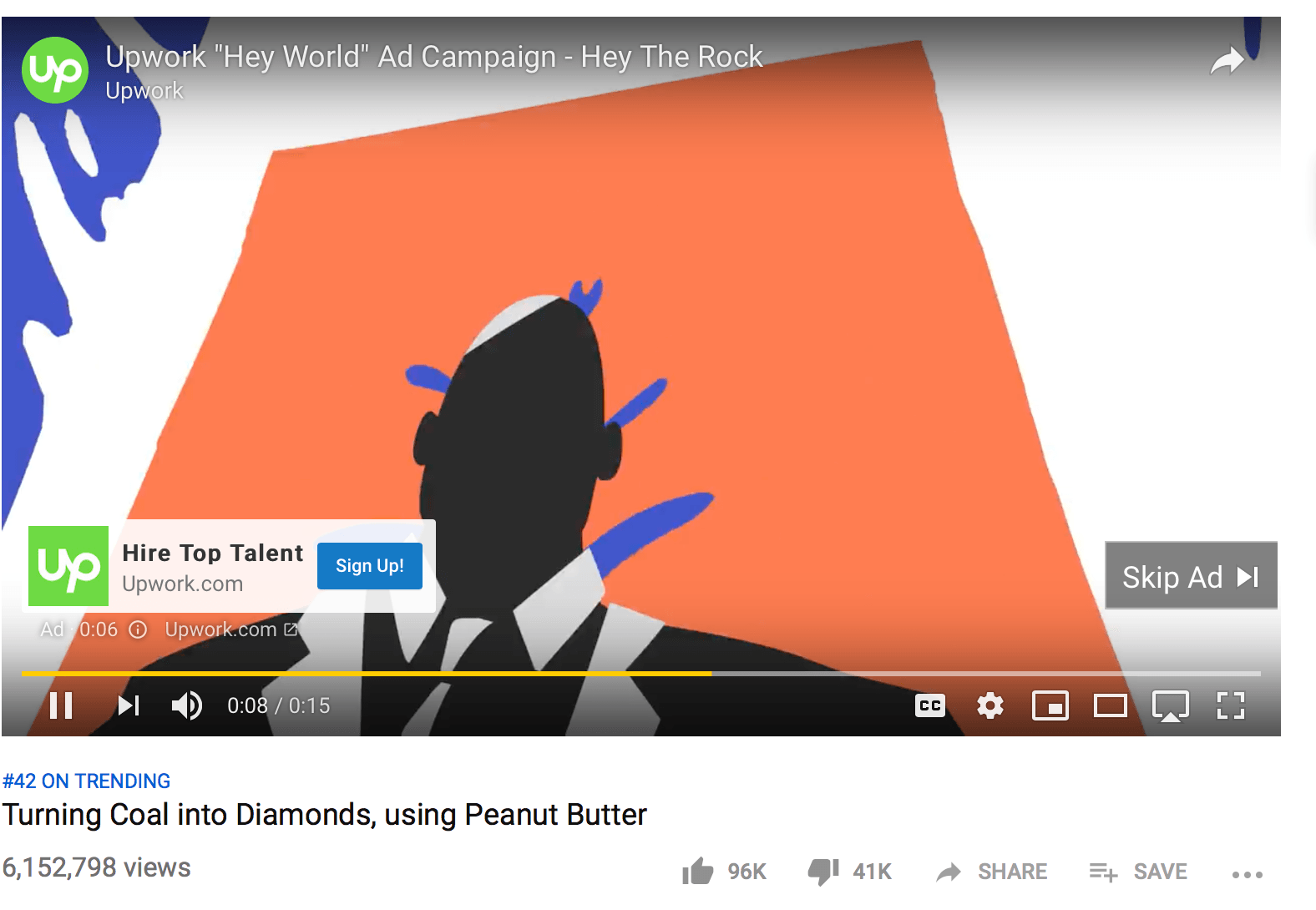 Native ads are ads that blend well with the content of your pages. Thus, they can bypass some ad blockers.

While these ads contribute positively to UX, as they aren’t as obvious and obnoxious. However, they’re also not as effective as display ads, and might not be practical for all publishers.

Keep in mind that in the future, a newer breed of ad blockers can easily block even native ads.

Whether it’s in the form of browser extensions, plugins, or private browsers. Ad blocking is here to stay.

If there’s a lesson to be learned here, it is that poor UX choices have consequences. As publishers tried to earn more from ads, fast – it ended up hurting them more in the long run.

As you consider any of the methods above to counter ad blockers, try to review your own ad experience as well.

Look at analytics, heat maps, and try to figure out if your users could be frustrated by your current ads. If you believe that might be the case, I encourage you to try and optimize your ad setup.

Such an effort can lead to happier visitors, returning users – as well as more revenue.